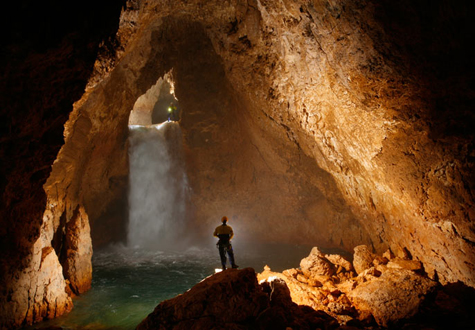 Scott Hanselman has or had a series called the weekly source code, in which he reviewed open source code as a learning exercise. I have enjoyed looking through the source of robots-txt by Mark Wotton so I will follow Mr Hanselman’s lead and document my experience spelunking this source.

The first thing I noticed, in the root of the repository, is the robots-txt.cabal file. This file defines how the project will be packaged for use as a dependency of other projects and also the dependencies of the current project for installation. robots-txt is defined as a library, meaning that it exports things to be used in other applications and does not have its own executable.

Below the standard package definition robots-txt.cabal includes a setting I have not seen before, test-suite. robots-txt uses the older exitcode-stdio-1.0 + main-is style of test suite ‘that indicate test failure with a non-zero exit code’. Adding the test-suite configuration means that the project’s tests can be run with cabal test. Yet another reason to add cabal configuration to all projects, not just the ones that are intended to be distributed as cabal packages.

The usage of hs-source-dirs for both the library and test-suite configuration is also interesting.

The robots-txt.cabal file defines the entry point for testing as test/Spec.hs. Spec.hs references hspec-discover in a GHC_OPTIONS pragma. hspec-discover looks for and executes all tests in the directory and any subdirectories. This is a convenient way to avoid having to maintain a list of tests to execute. In the case of robots-txt there is only one test file to discover test/RobotSpec.hs.

RobotSpec.hs uses hspec and the specification style of tests to define the behaviour of the project. It is curious that this style (describe… it… should) is popular on so many platforms and yet I have not seen a .NET implementation.

RobotSpec.hs uses the {-# LANGUAGE CPP #-} pragma, which allows it to use the special symbol FILE which is presumably replaced by the current filename pre compilation.

I don’t understand how RobotSpec is executed, since it doesn’t declare a main function like the hspec examples and it doesn’t export anything.

At first I didn’t understand the use of forM_, but a bit of googling, and particularly this stackoverflow question provided some insight.

The actual program is contained within the Network.HTTP.Robots module. It defines a number of data structures and some functions for operating on them. Some of it is confusing to me, such as the directiveP function. I suspect I need to spend some more time with Control.Applicative

Looking through Robots has been both fun and enlightening. The code is simple enough for me to understand (mostly) and it is small enough to be easily digestable. I’ve learnt a few things, particularly about how to setup testing which is an area that I have been planning to improve.